A blog by developers at Deep Network GmbH

Web apps in early 2000 were usually monolithic, having the frontend-backend coupled in the same application, with a server hosting the application end to end. The forms way of authorization was being done in the application, and the web user was authenticated using user agent cookies.

As time passes, websites naturally tried to do more. For example, sites like Facebook and Yelp wanted to invite your mail contacts into the site, and naively they asked for your email password on other providers to connect and get your contact list. But this was a horrible way of getting data. 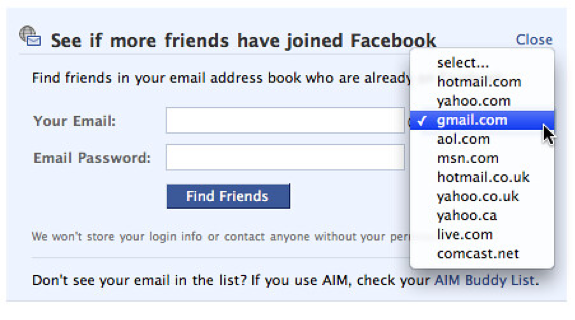 The need for Delegated Authorization

In 2006, guys from Twitter and Ma.gnolia discussed for a better way of sharing data across sites and they concluded there were no open standards for API delegation. Soon enough there was a discussion group with Google joining and in 2010 OAuth version 1.0 was released. It was a framework based on digital signatures.

However, OAuth 1.0 required crypto-implementation and crypto-interoperability. Due to the cryptographic requirements of the protocol, developers were forced to find, install and configure libraries which became difficult to implement.

In October 2012 came OAuth 2.0, which is a complete rewrite of its ancestor. OAuth 2.0 represents years of discussions between a wide range of companies and individuals including Yahoo!, Facebook, Salesforce, Microsoft, Twitter, Deutsche Telekom, Intuit, Mozilla and Google.

OAuth 2.0 with an example

Let’s imagine we have an ASP web app called fizzbuzz. We need to let google know about it, thus a one-time setup must be made. Once the registration is done, we have a client id and a client secret on hand, which are used on some scenarios.

Client secret is a sensitive data and must be stored on client securely. It will be used to prove that we are the correct client when we’ll exchange authorization codes with access tokens. The key elements of OAuth 2.0 are as follows.

Resource Owner; the user who owns the credentials and data

Client; is the application, who will ask for the delegation and access remote data.

Authorization Server; is the authority who can grant access to client.

Resource Server; (sometimes same with Authorization Server) is the resource that client wants access to.

Authorization Code; is a short-lived token, sent to client after authorization. It is used for exchange with an access token.

When asking for permissions, it’s never all or nothing. It is a good idea to declare what kind of operations are permitted to client when asking for delegated access, and OAuth exactly does that with scopes.

Scopes are the list of privileges we’re asking for when doing a request. And consent screens make sure what is being granted. The list of scopes that can be requested is defined by the Authorization Server and all requests should be done accordingly. Here is a request specifically asking permission for user profile, contacts and calendar access.

In networking scenarios, there are two ways systems reach each other. Front Channel and Back Channel.

OAuth 2.0 supports different Authentication and Authorization flows (called grants) which serve different architectures. Each flow defines the request-response chain and between the client and authorization authority.

Most common ones are

Also, other flows exist, but not used in web apps.

Authorization Flow uses both front-channel and back-channel. Once authorized (with consent) the request is redirected back to a registered endpoint with the Authorization Code. Then this code is exchanged with an Access Token thru back channel. Then the app uses access token for resource access. 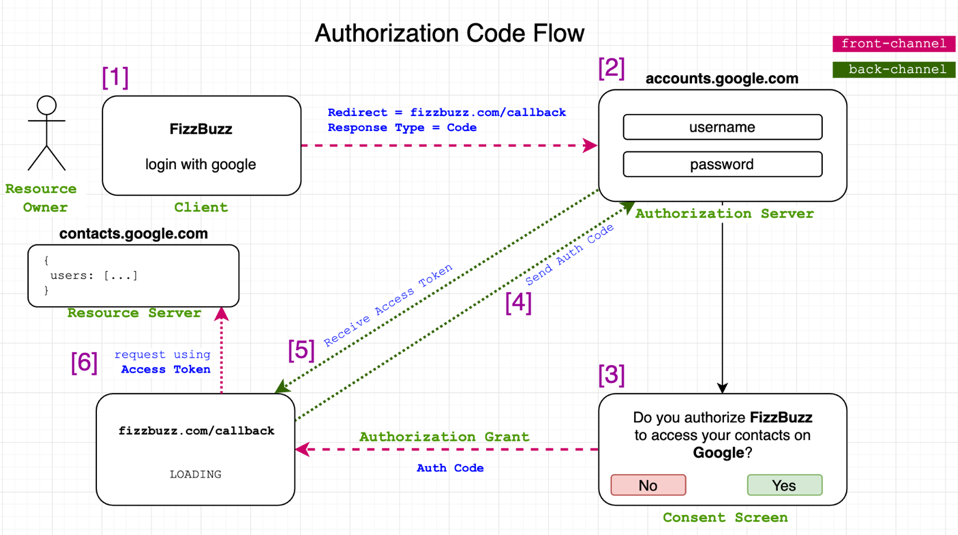 Back in early 2000 browser-based apps were restricted to sending requests to their server’s origin only. Because of the Same Origin Policy, there was no way to call an authorization server’s token endpoint at a different host.

Thus, frontend applications were not able to get an access token from another origin using Authorization Code flow, and Cross Origin Resource Sharing was not commonly available (it was accepted as a W3C Recommendation in 2014). Even if it was available, SPA’s have the problem of keeping a client secret securely, which is another limitation.

For these reasons, Implicit Flow was mainly designed for SPA’s and JavaScript applications with no backend channel. 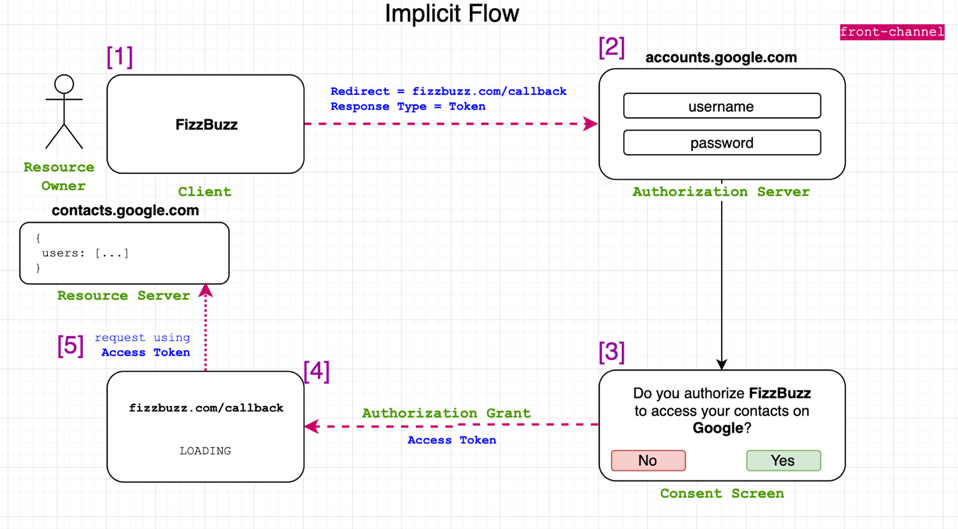 The implicit flow looks simpler and less requests involved, but this has also some security implications.

Today, the security flaws known for Implicit Flow is as follows; 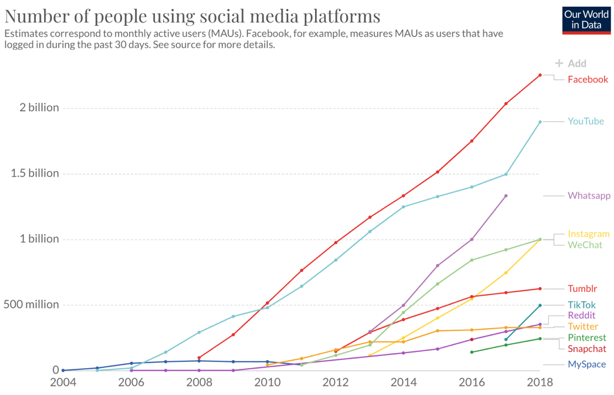 With the social media rise, OAuth 2.0 became popular and started being used widely, but not exactly for the right reason. Apart from Delegated Authorization, OAuth 2.0 was being used for Simple Logins, One Click Sign On across multiple sites (Facebook Login), Mobile App Logins and so on.

OAuth was designed for Delegate Authorization, but it was being used for Authentication as well. But it was not the right tool for the problem. One can even say this is against single responsibility principle.

A good analogy of an Access Token is an hotel key. Once you check into a hotel you are handed a key. The key does not know who you are, or how much you paid. It just lets you into your room and stops doing that when expires.

To solve this problem, yet another protocol arrived. Open ID Connect (OIDC for short) is a protocol, or an extension on top of OAuth 2.0. Its purpose is to standardize the Authentication part, so the OAuth implementations looked alike.

OIDC uses the scopes feature of an OAuth request, using the id_token scope, which actually means when we authorize, we also want the User Information next to the Access Token.

Id token is a long string in a specific format called JWT (JSON Web Token). It is represented as a sequence of base64url encoded values that are separated by period characters. It has 3 parts header, payload and signature.

The signature part has the cryptographic hash of the token. Without doing any additional requests, we can verify that the token is not tampered with and it is genuinely issued by the Authorization Server.

And if the id_token (User information token) does not have enough details for the user, we can always make a request to /userinfo endpoint on the Authorization Provider to get more custom information regarding the domain. With the use of Open ID Connect, we separate Authentication and Authorization in a standardized way.

SPA’s and mobile applications cannot securely store a client secret. Mobile apps can be decompiled, SPA is all JavaScript that runs in browser, as all it has is front channel it will expose the client secret.

To mitigate this, OAuth 2.0 provides a version of the Authorization Code Flow which makes use of a Proof Key for Code Exchange. (PKCE was originally created for mobile and native applications because, at the time, both browsers and most providers were not capable of supporting PKCE. That is no longer the case.)

This way, a malicious attacker can only intercept the Authorization Code, and they cannot exchange it for a token without the Code Verifier. 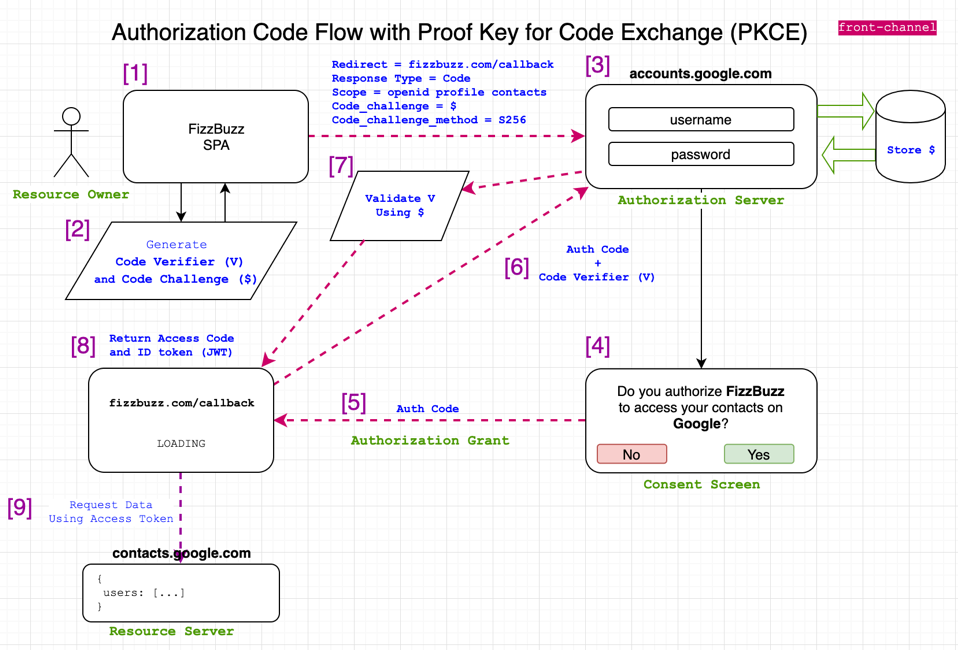 As SPA’s are rapidly used and as the nature of the apps are similar to mobile applications, it is suggested that the Authorization Code Flow with PKCE is to be used for Authorization and Authentication.

Since the authorization can be denied for requests that do not contain a code challenge. This is really the only way to allow public clients to have a secure authorization flow without using the client secret.